Jefferson, Dickens and Tolstoy are Irresistible in “Discord” by M.R. Hunter 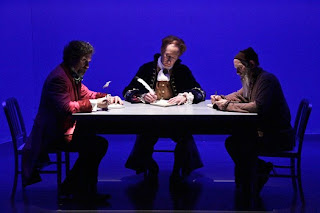 Discord abounds in Scott Carter's world premiere as egos clash in a philosophical debate concerning theology, epistemology, and metaphysics in an existential battle of self-judgment.

Three famous writers from three different time periods have one thing they all share: their faith. That faith, however, is subject to scrutiny by themselves and each other as they are confined to a white room in the hereafter. For these erudite captives, purgatory soon transforms into a hellish prison as they discover their personal beliefs run counter to their temporal justifications while challenging their cell mates' notion of absolute truth discoverable in the KJV gospels.


The gospel according to who is the operative query as the three men penned their own peculiar version of the scriptures, these being Jefferson's Bible, Dickens' The Life of Our Lord and Tolstoy's unorthodox The Gospel in Brief. As unique as the men who scribed them, each work characterizes their ideals with Jefferson favoring logic, Dickens' ecclesiastical mirth and Tolstoy's strict adaptation. For all what these works reveal about the writers and their inclinations to reason, humor or severity, it is Carter's otherworldly posit in the play that ultimately their bias and vanities serve to undermine them as they defend their bibles and the assuredness to have inspired them, rabidly so, as they argue for their idea of truth and morality.

Leading up to the trial, Jefferson, Dickens and Tolstoy debate and augment the other's text with eager editing and dismissals. Every inclination is examined and just as quickly disputed when art, science and the spirit collide, compete and are castigated in favor of the individual. For Tolstoy, the gospel boils down to three words spoken by Jesus Christ: "Resist not evil." The irony Carter weaves throughout is all three characters' resistance to face the evil within them. Each one finds themselves falling short of the principles they stubbornly cling to as gospel, compelled to reconcile the hypocrisies and contradictions as proof of their so-called convictions. 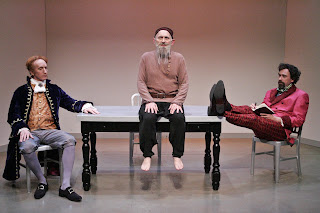 For all its heavy subject matter, "The Gospel According to Thomas Jefferson, Charles Dickens and Count Leo Tolstoy: Discord" is high-spirited and absorbing without taking itself too seriously and lacking any pretension. Wickedly amusing, the idiosyncrasies of each character provide for plenty of laughs as well as the quick repartee and zippy pace in its 90 minutes, no intermission. Director Matt August maintains the tension as the trio posture, bounce off each other and orbit around in their shared confinement. Larry Cedar gives Jefferson a puffed up aristocratic exasperation running up against Armin Shimerman's swaggering and blustery contemptuous Tolstoy. David Melville as Dickens is a comic dynamo with a jolly exuberance especially in his rapt appraisals. Costume design by Ann Closs-Farley vividly captures the period and personality of each character.

Talk backs following the show with the playwright and special guests include Kemp Powers, Kevin Bailey, Reza Aslan and Rainn Wilson, Soraya Deen, Clay Jenkinson among others. See schedule on the website for more details.

Resist not this play. It's smart, funny and good for the spirit. That's the gospel truth.

Photo credit: Michael Lamont
Posted by Unknown at 8:52 AM

Things To Do This Week